Relief and a trek back to Merville

“Next day I handed over to the 102nd Field Ambulance (34th Division), and got back to L’Estrade in the early afternoon after some hustle.

Next day (Sunday 31st March) we were up early, and marched off to Merville, via Crois du Bac and Estaires. I rode most of the way, and the men marched very well in spite of being tired after so much hustling during the last few days. In Merville the men were billeted in deserted houses and we had our mess and billets in a large empty villa. Most of the houses near the railway station were badly damaged by shells and bombs, and the inhabitants had left the town hurriedly.”

Merville had at this time suffered a great deal of damage and had been almost totally destroyed, its inhabitants had largely gone. Back in November 1915 it was the area HQ for the British Army and was where Churchill had been asked to attend the aborted meeting in the incident that inadvertently saved his life. 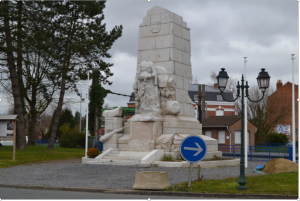 Photo © Ray Coggin. The War memorial in Merville, damaged in a subsequent Battle of the Lys in May 1940