A Cold Sponge Down by a Middle Aged Nurse!

“On Friday 12th we packed up, and marched via Talmas to Rubumpre. We pitched our tents in a field outside the village, and had a splendid view of the surrounding country.

I hadn’t felt at all well for some time – not since getting a whiff of gas whilst with the Artillery – and at night on the 13th April felt very seedy. Next day my throat and chest were very painful. My temperature was above normal, and I felt decidedly rotten. As we were to move on again that day, the Colonel very reluctantly decided to send me back to the Casualty Clearing Station at Gezaincourt. So I was packed off there in an ambulance car feeling very miserable, and grieved at having to leave all my good friends. I was a patient in No. 45 C.C.S. for one night only, being evacuated by ambulance train at 8.30 p.m. on the 15th. It was a terribly slow journey – we didn’t reach Rouen until 3 p.m. on the 16th April! However, it was a beautifully equipped and most comfortable train. I was a stretcher case and felt very ill. My throat was completely closed up, and very painful. The doctor in charge of the train was a Captain Cowans, whom I knew as a resident house surgeon with Mr Cathcart in Edinburgh Royal Infirmary. At Rouen we were conveyed by motor ambulance to No. 2 British Red Cross Hospital, and after a lot of lying about on my stretcher in vestibules and corridors, I was at length heaved into bed between lovely cool sheets, and felt some better and happier after a cold sponge down by a dear of a Scottish sister (middle-aged!). The doctor – Major Hudson – came to see me in my little room, and told me that my throat and air passages were very badly ulcerated, and must have been so for some considerable time. I was unable to speak or swallow. He prescribed gargles, inhalations and compresses externally. I didn’t sleep – hadn’t had a wink for days now.” 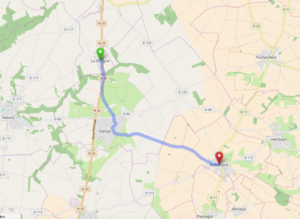 It seems that Douglas had now succumbed to the “mouthfuls” of gas from the attack on March 11th. From the slightly embarrassed mention of the “cold sponge down” it would seem that he was suffering from the effects of mustard gas poisoning. This would often manifest with blistering of the body as well as the ulceration of the throat and respiratory organs. (More on the use and effect of gas in an additional post).

The slow train journey to Rouen was to mark the end of Douglas’s adventures on the Western Front but not the end of his war. That was over a year away. 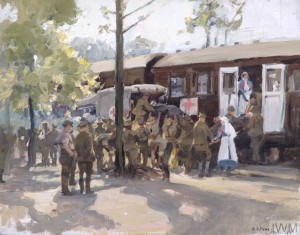