The Road to Recovery

“I was in bed for ten days, and the condition of my throat gradually got better.  I was extremely well cared for. When I did get up I was very shaky, but was glad to get out into the beautiful gardens of the hospital (a theological college in peace time). When I was able I got out into the town, and saw the lovely cathedral, and the shops. In the mornings I used to help Major Austin in the wards by giving chloroform whilst he dressed the seriously wounded officers.

One afternoon another officer and I went for a trip up the river on one of the small steam-boats. It was a beautifully warm and sunny day, and we enjoyed our outing very much. We got off the boat at a pretty little place called Val de Haye, and after a stroll through the village had tea at a place run by an Englishman. There was a merry party of nurses and V.A.D.s on board, and we sang all the way back to Rouen.

Another day we journeyed up river to La Bouille, also a very pretty little village, where we had coffee and biscuits in a quaint old inn.”

By now we know Douglas Page to be a master of the understatement. His narrow escapes that can only pay allegiance to Lady Luck seemed to be never more than a nasty nuisance, responsible for the occasional “wind up”! However, although not deserting him entirely, luck had now worn a bit thin and for the time being at least removed him from the front line of war. The contrast must have been tremendous. Often never more than a few feet or a split second away from being blown to kingdom come, this painful time in hospital at least gave some time to enjoy the nicer side of France.

La Bouille, a little further downstream today retains its rural charm and a convenient car ferry to cross the river. 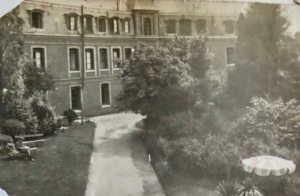 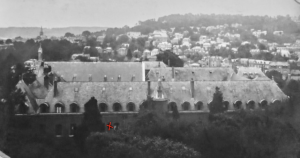 The No.2 British Red Cross Hospital, Rouen, France. The red cross denotes the ward where Captain Page was a patient. 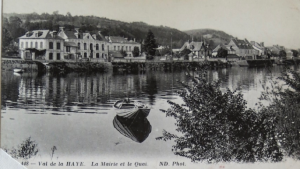 If Douglas were able to take that same trip now one hundred years later he would be totally shocked at the transformation of the idyllic scene he enjoyed then. Today both banks of the river are lined with the infrastructure of heavy industry. Many wharves flanked by gas and oil tanks, silos, and factories, railway tracks with marshalling yards mark France’s modern prosperity. 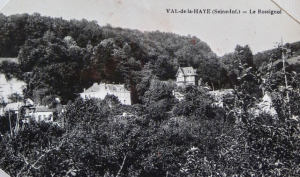 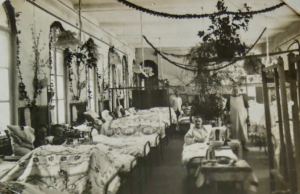 A ward in the No.2 British Red Cross Hospital, Rouen, a former theological college. Major Austin (the surgeon) standing in the centre of the ward. 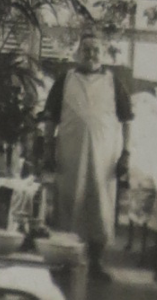