Scrambling around for supplies for a mission along the Dwina River

“At 2.50 p.m. on Friday August 30th I received orders from Major Richmond, R.A.M.C. (now Lt. Col.) commanding 85th General Hospital, to report to Capt. Scott. M.C., 2/10th Royal Scots at 3 p.m. on a barge at Bakharitza quay – situation unknown – and to take seven days’ rations with me. That was all. The order came from the A.D.M.S. I reported to Capt. Scott at 3.15 p.m., and found that he was in charge of a small force of some fifty Royal Scots under Lt. Anderson, and forty R.M.L.I. under Capt. Merchant, and that our destination was Siskoe on the Dwina. (Later I discovered that this force was supposed to effect a junction with Col. Haselden (B. Force), who was at that time hemmed in on both sides by Bolsheviks between Obozerskaya and Seletskoe). Lt. Col. Sutherland, 2/10th Royal Scots, who was supervising the embarkation of the force, asked me if I had any medical supplies with me. I replied in the negative as I had not been ordered to bring any. On ascertaining that there were none on board I immediately took steps to procure same, and after some difficulty managed to obtain a Medical Companion, a Surgical Haversack, two water-bottles, and two stretchers from Lt. & Q.M. Warey, R.A.M.C. 85th General Hospital. I had no R.A.M.C. personnel attached to me, although I asked for two men. Moreover there were no trained stretcher-bearers in the party. But I taught two Royal Scots, and two Marines a little first aid on the journey up river.

The barge we occupied was a vile affair. One half of it was under water, with the result that the men had to crowd together in the other half. Moreover there were no heating or cooking arrangements on board, although just before we started we managed to “acquire” a stove of sorts from a neighbouring tug. The tug detailed to pull us up-stream was a miserable little thing of about twelve H.P., and capable of doing about 2 M.P.H. against the stream. We calculated that it would take us about three days to reach our destination. And this was supposed to be an urgent expedition!

We eventually set off about 6.30 p.m. in a thick, damp mist, and not in the best of spirits. About 10 p.m. having proceeded about six miles, we stopped, and got some boiling water from the tug to make tea with. Then another tug came along, also proceeding up-stream, but with nothing in tow. We hailed her, and after a lot of talking (luckily we had an interpreter with us) managed to persuade the new arrival to help us along. I slept that night amongst the men, and was quite comfortable.”

It was a case of thinking on your feet for Douglas. No trained medical men to accompany him he took some likely looking men and quickly trained them in the rudiments of first aid. It was the experiences gained on the Western Front and other theatres of war at the time that saw the rapid development of first aid in the field. It highlighted the importance of getting fast treatment to injured men that would save not only their lives but just as importantly for the army, greatly increase the chances of returning men to the front line.

The Quarter-Master, Lt. Warey, probably spent his peacetime living at 133 Oxford St in central London and was married in Dorset although at the moment this is subject to confirmation. We greatly encourage any further information on Lt.Warey 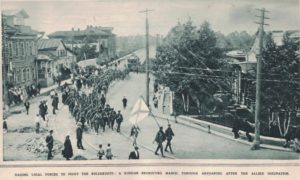