Vile tea, a bit of improvised training and then an exciting river chase!

There seemed to be no respite for Douglas now. Despite never having borne arms for the last 4 years in the war, he now finds himself brandishing a museum piece of a gun given to him to protect himself. What follows is an exciting episode in itself and an amazing departure from sick parades, blood soaked hospitals and emergency surgeries.

“All next day which was dull and mild we proceeded slowly on our way. The Royal Scots were given rifle and machine-gun practice from the roof of the barge, as very few of them knew how to handle these war-like implements! The Royal Scots struck me as being a poor lot. They were all B category men. Most of them were under-sized, and maldeveloped, and many wore spectacles. Our food consisted of bully beef, biscuits, jam, and vile tea made from Dwina water from the boiler of one of the tugs. It’s a wonder all of us hadn’t diarrhoea after drinking it.

About 4 p.m. that day (August 31st, Saturday) a paddle steamer came rapidly down-stream and hailed us. She had a Russian flying corps lieutenant on board, who had come from Siskoe (our destination) in a great hurry to tell us that the Bolshevik forces, three hundred strong were marching on Siskoe (pronounced S-e-e-s-k). He also told us that a Slavo-British force about sixty strong under Capt. Shevtoff (a Colonel in the old Russian army) was attempting to hold up the Bolshevik advance. After a hurried council of war most of us, including Capt. Scott, Capt. Merchant, Lt. Anderson and myself got on to the paddle-steamer, and steamed “hell for leather” to the relief of Siskoe! A party of a dozen men was left on the barge to guard our stores and baggage, and the small tug detailed to come along with it. The rest of the men were transferred to the second and larger tug, which followed us. Machine-guns were mounted on the deck of our boat, and rifles loaded. The excitement was intense! Capt Merchant lent me an ancient, and cumbersome Spanish revolver captured from the Bolsheviks, and I prepared for the worst. In spite of all the excited Russian officer told us none of us believed the situation to be so bad as he had painted it.

Nothing further happened till about 10 p.m. when a sentry came down to the stuffy little cabin which we occupied to tell us that there was some signalling with a lamp going on behind us. We all trooped up on deck, and there sure enough in the darkness a hundred yards or so behind us was a lamp signalling. As none of us knew the Morse code, we called up two Royal Scot signallers, and they interpreted the message as “stop”.  So we stopped, and wondered what was going to happen next. Was it a Bolshevik gun-boat, or what? Soon the boat came into view, and with a sigh of relief we recognised it as a British M.L. After some difficulty she came alongside, and the commander – a young and cheery Lieut. R.N. – came aboard. He informed us that he had left Archangel at noon to-day with instructions to catch us up, and tell us that the Bolsheviks were probably occupying Siskoe – our landing place! He had come up the Dwina at the rate of twenty-two knots an hour. Some speed! He just caught us up in time, for we were then only a few miles from Siskoe. We had another conference, and eventually decided that the M.L. should go on ahead of us and find out if the coast was clear. So we crept slowly along with all lights out. It was a pitch-black night, raw and cold. My Horlochs lamp was useful in keeping us in touch with the M.L. Eventually we moored alongside the island opposite Siskoe just after 11 o’clock. Capts. Scott and Merchant went ashore to find out what was what, whilst Anderson and I very wisely had forty winks in the stuffy cabin. The adventurers returned about 3 a.m. (September 1st), and told us that the Bolsheviks were about twenty miles away, and that Capt. Shevtoff, and his Russians were in the village of Monastir about five miles off. So far so good. We all went to sleep.” 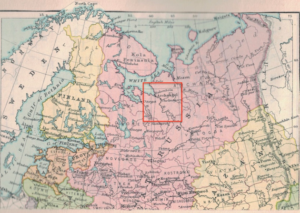