“We were up early on Monday, September 2nd and left Monastir shortly after 8 a.m. for Vymuga. It was warm and sunny. Our transport now consisted of thirty carts, as our baggage and extra supplies came forward from Siskoe last night. We marched along through some very fine country, reaching Vymuga about 10.30 a.m. Capt. Shevtoff met us and reported all quiet. Just before entering the actual village of Vymuga we came to a river, across which there was no bridge, but only a rope ferry. Capt. Scott decided to leave his transport on the Siskoe side of the river in case the Bolsheviks chose to attack us in the night. We all – officers and men – got good billets in the village. I came across a British R.A.M.C. man – Pte. Woods – with the Russian troops here. He was originally with Capt. Leslie R.A.M.C., M.O. to B. Force, but was detailed to go with the Russians after Col. Haselden retreated from Seletskoe. Col. Haselden’s idea was to force his way along to Obozerskaya (on the railway), and he left the Russian detachment to guard his rear at the road-junction between Seletskoe and Teogra. But the Bolsheviks were too much for the Russians, so the latter retreated to Monastir, where we found them, and thus the Bolsheviks were able to get in behind ‘B’ Force, and make its position a critical one.

In the afternoon an aeroplane flew over, and dropped a message to say that nothing could be seen of ‘B’ Force, and that the Bolsheviks were digging trenches at Teogra, a village about five miles off. We wondered what had happened to Col. Haselden and his gallant, little band – whether he had been captured, or whether he had taken to the forest. Anderson went off in the afternoon with six of his men to arrest some Bolsheviks in a neighbouring hamlet. He returned about 5 o’clock with a dozen miserable-looking prisoners. They were sent off to Archangel via Siskoe later on, and a few days later we heard that our brilliant intelligence department had liberated them all! Just before dark Capt. Merchant went off with a party of thirty marines to take up a position about five versts beyond the village on the road to Teogra.

During the evening we had a visitor. He was Lt. Dimitroff, of the White Guards, and had ridden all the way from Yemetskoe to see us, and tell us that he would guard our left flank. Capt. Scott and he were soon out of sight behind a mass of maps, and sketches.

But we got the surprise of our lives about 11 p.m. when a French captain – Capt. Du Pay – marched into the room. He told us that he was in charge of a French machine-gun detachment of sixty men, and ten guns, and that he had also brought along with him a party of forty Marines (British). They had been sent in a great hurry from Beresniki – a place over a hundred miles higher up the Dwina from Siskoe to our relief, as it had been reported that we were just about to be annihilated! Poor old Capt. Du Pay was in a very bad temper, but soon cheered up after he had something to eat. I took on the job of getting the French and Marine transport across the river on the pontoon. It was a slow job, as only one cart could go on the raft at a time. There was a fine display of Aurora Borealis. I got to bed – a fine feather mattress on the floor – about 4 a.m. 3/9/18.” 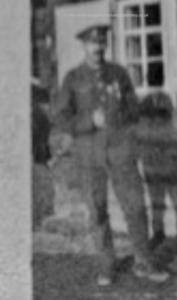 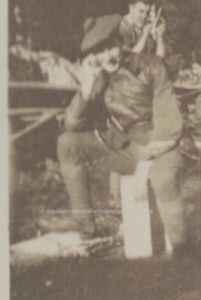