Landing in Siskoe and a walk in the forest

“We were all up at daybreak on Sunday September 1st, and after a hurried breakfast of bully beef and biscuits, got men disembarked, and then landed all our stores – ammunition and food – on to a dozen Russian carts – quaint Heath-Robinson affairs drawn by sturdy, little ponies, and manned by all sorts of weird-looking men. The main village of Siskoe lay about a mile from the river, and by the time we had arrived in the place, the whole population – male and female – had turned out to look at us. They were a funny-looking crowd, and they swarmed round us when we halted in the middle of the village, asking for ‘seegarettes’ and ‘Tabac’. In one house we found an A.S.C. Corporal – in charge of Col. Haselden’s base – and from him we drew a quantity of supplies. Here also we came across an American sailor – a tall, lanky fellow – who had just arrived in Siskoe from Col. Haselden. He had come right through the Bolshevik lines, and had ridden, and walked seventy miles in the night. Meanwhile Capt. Scott had been indulging in a little recruiting (through the interpreter), and had got together a party of thirty-five Ruskies armed with rifles, who called themselves White Guards. Each had a dirty piece of white cloth tied round his left arm. They were a tough-looking crowd. We left Siskoe about 9 o’clock en route for Monastir. The Royal Scots led the way. Then came the marines, next the White Guards, and the rag-time transport brought up the rear. The road – a sandy track – took us through some lovely country. There was a dense forest on our right all the way, and on our left a swift-flowing river, and then a great lake with forest behind. The autumn tints on the trees and bushes were very pretty, some of the trees being bright, bright red, and others a beautiful yellow. I noticed a lot of heather, and blaeberries were plentiful. During a halt one of the drosky drivers picked me a cap-full of these berries, which had a delightful flavour. His joy was wonderful to behold when I rewarded him with a cigarette!

On reaching Monastir we were met by Capt. Shevtoff, and his three subalterns. They were all obviously relieved to see us. Another conference ensued! We questioned one of Capt. Shevtoff’s men, who had escaped from the Bolsheviks that morning. He had come about ten miles bare-footed, and told us that the Bolsheviks were about nine miles away, just beyond the village of Vymuga, and that they were in considerable force. The conference decided that Capt. Shevtoff’s party should go forward in the afternoon, and get in touch with the enemy, and that we would follow early tomorrow after a rest which we all badly needed.

After the usual army lunch Lt. Anderson and I had a look round Monastir and district, and found it to be a lovely spot. The village consisted of some twenty wooden houses, situated on the edge of a beautiful lake. On the opposite side of the lake was a huge monastery – all white, with green, and blue, and gold turrets and domes which glittered and glistened in the bright September sun. The clear reflection of this striking edifice in the smooth waters of the lake was wonderful. Anderson and I had a stroll round to the Monastery after tea. An old priest – the usual type with long hair and beard, and dirty mouldy-looking cassock – showed us around the place. It was a wonderful place inside. Huge, glittering chandeliers hung from the domed roof, beautiful paintings adorned the walls, and crosses etc. studded with precious stones were all over the place. It was a great sight. We saw the priests’ vestments, which were made of gold cloth, and decorated with jewels. Then the old priest showed us the small private chapel into which only the Czar, Czarina (alas! no more), and priests are allowed to enter. The kitchen of the Monastery fairly took my breath away. I never saw such a huge place in all my life before, and the monk-cooks in dirty, white cassocks looked like goblins. In the extensive, and well-kept gardens around the Monastery we noticed cabbages, potatoes, cucumbers, currants etc. The priest made us a present of a loaf of black, rye bread, and some butter. The bread was very heavy and sour, and the butter – well, it was lard! Regular pilgrimages are made to this Monastery at certain times of the year from all parts of Russia. There is accommodation for three hundred pilgrims in the huge place. At night we had patrols out all round the village.” 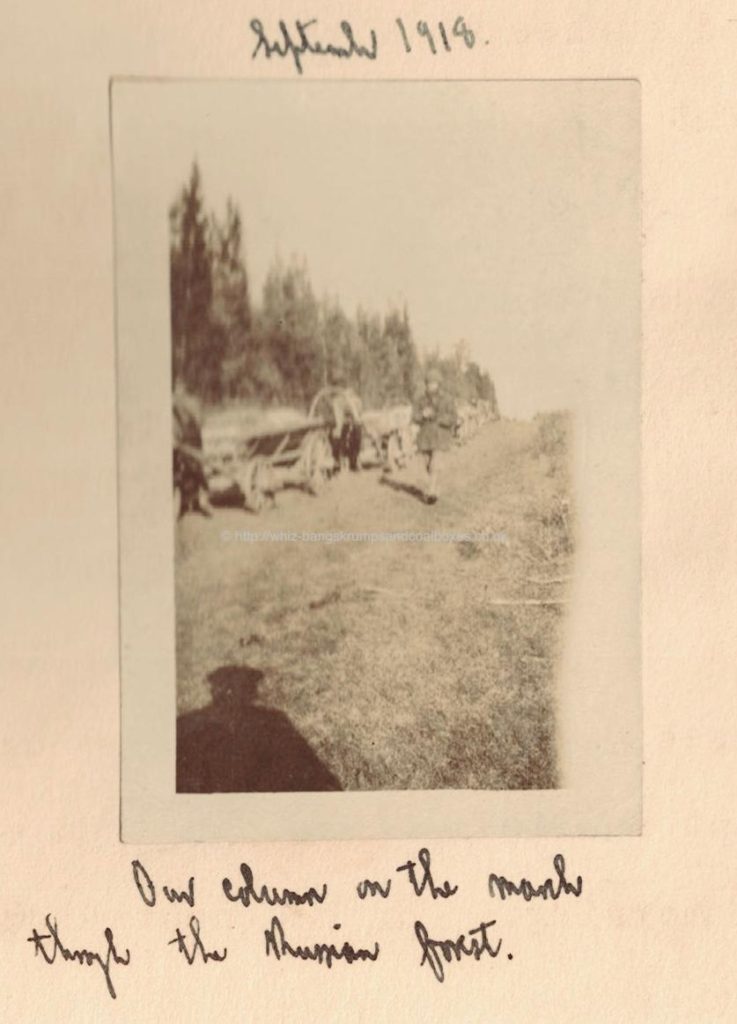 Those of us of a certain age occasionally use the phrase “Heath Robinson” when referring to something that seems overly complicated for the task at hand. The phrase is defined in Chambers’ dictionary as Heath-Robinson: adj used to describe an over-ingenious, ridiculously complicated or elaborate mechanical contrivance. There can’t be many people whose surnames become adjectives. The phrase was in use by 1912 during his lifetime. He died in 1944.