“Friday the sixth was a cold, wet day. I had quite a big sick parade in the morning, mostly chills and rheumatic pains after the exposure of the last few days. One of the marines dislocated his left shoulder, whilst carrying an ammunition box. I got it back all right after a little manipulation. I also attended to a few Russian civilian sick and had a look round the village – a long, straggling line of about fifty houses.

Of course they were all built of wood, the better class ones being painted yellow outside. There was the usual white, gold and green church with domed tower containing a peal of bells. The inhabitants were very friendly towards us, but the village, besides its own population, contained about three hundred refugees – mostly able-bodied men – from the surrounding districts. These people came to us asking for food, and we promised to help the as soon as more supplies came up from Siskoe. There was a civil telegraph line from here to Siskoe, and Capt. Scott wired for more supplies to be sent up.

I indulged in a Russian bath in the afternoon, and enjoyed it immensely. It was a great stunt. The bath-house was a little wooden hut behind my billet, heated up by a charcoal stove. In order to get up a good heat one threw water on the red-hot charcoal. At one side of the hut was a wooden platform arrangement arranged in tiers, and the higher one mounted the hotter the atmosphere became. It fairly made me sweat, and I was as limp as a wet rag after it all.

Capt. Scott got a telegram from G.H.Q. to say that we were now known as ‘D. Force’. We also heard that several British, American, Italian, French and Japanese troops had arrived at Archangel. Oh, those rumours! If they were only true! We also heard that a force was pushing along from Obozerskaya to meet us.

At night two thousand rations arrived in charge of one wretched blue-jacket! He informed us that the drosky drivers had looted a lot of the stores en route. The dirty dogs!

Some of our noble band of White Guards left us during the day They said that they were ‘fed-up’ and wanted to get back to their homes! What about ourselves! That’s just the Russian all over. He is a lazy, good-for-nothing individual, who wants us to feed him, and save him from his enemy, the wily Bolshevik.” 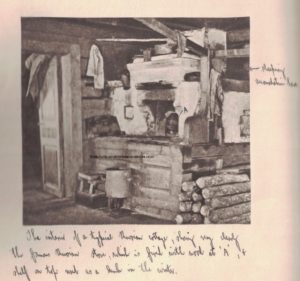 The interior of a typical Russian cottage, showing very clearly the famous Russian stove, which is fired with wood at ‘A’ and shelf on top used as a bunker in the winter.