More Biting Insects, Tartan Trews and the tragic loss of a hero

“Saturday, the seventh, was another wet day. I saw a lot of sick of all nationalities in the morning, including a Russian girl with toothache. I couldn’t extract the offending molar as I had no forceps, but I painted the gum with iodine, and she went away quite happy. I wired the A.D.M.S. to send me up Nos. 1 and 2 Field Medical Panniers urgently.

In the forenoon Capt. Merchant went up with his men to relieve Lt. Anderson and party, who returned at dusk utterly fagged out.

I was bitten a lot by the wood-bug, which is an essential inhabitant of every Russian house.

During the day one of the Royal Scots, who got lost the other day, turned up. He was very much worn out, as he had been wandering about in the forest, and marshes for three days without food or shelter. He could tell us nothing about the fate of the other five men. I took him into hospital for a rest.

Then three French soldiers arrived from Col. Haselden’s force. They told us that the little force had become so hard pressed by the Bolsheviks that Col. Hasleden had to give the order to abandon everything, and take to the forest. Two drosky drivers also arrived from the same force.

Later on in the day a girl came in from Teogra. She belonged to this village, and had been captured by the Bolsheviks ten days ago, whilst out in the fields with her cows. The Bolsheviks killed, and ate the cows, and ill-treated the girl. She had very few clothes on, and had escaped through the forest, and marshes without shoes or stockings on.

Capt. Norman, Royal Engineers, arrived in the afternoon from Beresniki. He told us of the death of Lt. Main, 2/10th Royal Scots, who was drowned in the Dwina a few days ago. He slipped off a narrow gangway connecting a boat with the shore, and instantly disappeared in the swift-flowing stream. As it was a particularly dark night, all search for his body proved fruitless. He was one of the best, and we were all very sorry to hear of his sad end.

Our two 18-pounder guns arrived in the evening with Rusky crews, and in charge of two Russian officers, and two British sergeants. Each gun was drawn by eight small horses, and umpteen carts came behind with ammunition. The villagers, who had never seen a gun before, turned out en masse to witness the great event.

Lt. Anderson created a bit of a sensation too by turning out in tartan trews and glengarry!

About seven o’clock in the evening we had a message from Capt. Merchant to say that his patrols had found the village of Teogra unoccupied by the Bolsheviks. Capts. Scott and Norman went forward to investigate matters. Meanwhile we got ready to move forward when required. Capt. Scott got back about midnight with the news that we were to stay overnight in Vymuga, as one of the bridges on the road to Teogra was damaged.” 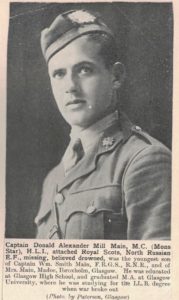