Old Old Men, Some over Sixty Years of Age! And a Russian Hero Aids the Allies.

“Wednesday, September 11th, was another fine, sunny day. I attended to a few British and French sick in the morning, but there was nothing seriously the matter with any of them.

The drosky drivers threatened to go on strike, but Antofioff soon settled them. They wanted more food, and no wonder, for at present they only get five biscuits, and half a tin of bully each, and a tin of Maconochie between eight with a little tea and sugar per day. We increased the rule to six biscuits, and a whole tin of bully each per day. I never saw such a motley crew as these drivers of ours. There were old, old men – some over sixty years of age – with great bushy beards; young boys – the youngest (little Tich, who drove my cart) aged ten; and a fair sprinkling of women, young and old. They did their job very well, and we should have been absolutely helpless without them.

They got no pay – only their rations, and food for their horses. We bought hay in the villages. Capt. Scott had a few thousand roubles given to him for this purpose before he left Archangel.

But a word about Antofioff. He was a native of Teogra, and had been of great use to Col. Haselsden earlier on in the campaign. He was a man of about thirty, and always carried a huge gilt sword at his side. He attached himself to us at Teogra, and Capt. Scott put him in charge of the transport. He helped us a great deal and but for him we would never have kept our transport together. We were never able to get enough carts from one village for our purpose, so that we had to enrol them from different villages all over the country. These people were always wanting to get away back to their homes, and in then we had to arrange a system of weekly reliefs.

At night three R.A.M.C. men arrived to help me. They brought up medical panniers, blankets and stretchers with them, for which small mercies I was truly thankful.

During the day we dug a system of trenches around the village and got our guns into position. In the night some of our rag-time drosky people departed so we decided to put a guard on the rear end of the village to stop this in future.” 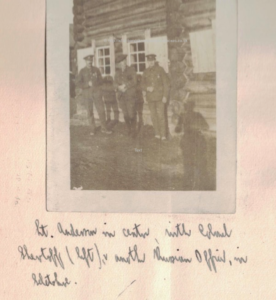 Lt. Anderson in centre, with Colonel Shevtoff (left), and another Russian officer, in Seletskoe.

If you’re wondering what Maconochie was this blog post gives a good idea.