“It was again warm and sunny on Tuesday, September 10th. In the house next door to the doctor’s place I established a small hospital. It had been used for Bolshevik sick, and was in a filthy condition. There were six rooms in the house, with six iron beds, and mattresses, which were full of dirt, and bugs.

I had a walk around the village in the afternoon, and got a splendid view from the top of the small hill behind the village. All around me I could see nothing but miles and miles of forest. There were many women working in the fields reaping the crops in good old-fashioned style.

I got a message from Capt. Daw. R.A.M.C. to say that he was stationed at Siskoe for the purpose of evacuating any wounded or sick to Archangel by boat. We heard that 2/Lt. Heath of the 2/10th Royal Scots had arrived there too to act as Commandant of the place.

Capt. Norman left us in the evening for Yemetskoe en route for ‘C’ Force once more.

During the day one of the villagers bought in one of the Royal Scots’ Lewis guns, which the Bolsheviks had forgotten to take with them.” 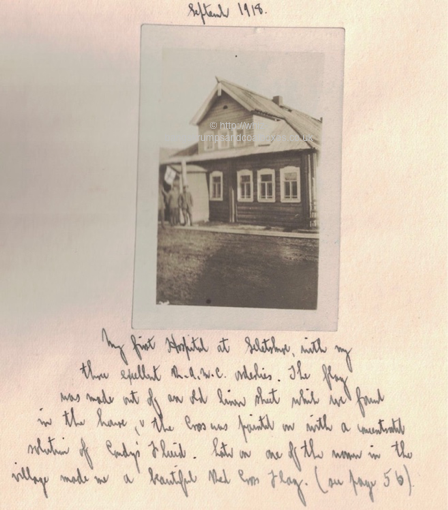 My first hospital at Seletskoe, with my three excellent R.A.M.C. orderlies. The flag was made out of an old linen sheet which we found in the house, and the cross was painted on with a concentrated solution of Condy’s Fluid. Later on one of the women in the village made us a beautiful Red Cross flag.

Condy’s Fluid was a purple liquid patented by Henry Bollmann Condy in 1857. It had a multitude of uses. Taken internally it could prevent or treat scarlet fever, but used externally it could disinfect water and be used as what we would call today an air freshener.