Episode Two of Douglas’s Russian Experience and the Death of Lt. Kenneth Croal

“I set off on Tuesday 22nd October on the second part of my Russian adventure. I crossed by boat at one o’clock to Bakharitza on the other side of the Dwina, and proceeded to 82 Casualty Clearing Station where I put up for the night. All the next day I was busy buying stores – candles soap etc. – from the canteen. I heard that Kenneth Croall had been killed in the Railway Front. The news came as a great shock to me, as I was looking forward to seeing him again.”

“Lt. Kenneth Croall(sic.), 2/10th Royal Scots, was an Edinburgh boy whom I got to know very well on the voyage out here from England. He had only been up at the
front for a day on tour when an enemy shell landed in his dug-out, killing him instantaneously. He was buried in the lovely little military cemetery opposite the railway station at Oberzaskaya in the depths of the Russian forest. The
Royal Air Force officers were very kind & at my request made a cross made of an aeroplane propeller & erected it over Kenneth Croall’s grave”. 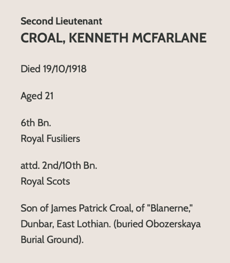 Kenneth Croal is mentioned by General Ironside in his account of the Russian Intervention, Archangel 1918-19 and now has a memorial in the Archangel Allied Cemetery in Archangelsk, North Russia.

Although Douglas intimates that he met 2nd Lt. Kenneth Croal on the City of Cairo bringing them both to Archangel, Kenneth was in fact well known to friends of the Page family the Sturrocks of Leith. When I first read the mention of Lt. K Croal in General Edmund Ironside’s “Archangel 1918-1919”, I knew that it was a name familiar to me. Searching through family photographs we came across the picture that I knew we had. Fortunately, a contemporary relative had marked the backing paper of the picture identifying those in the group. The group consisted of Kenneth Croal then aged about 18; T.G.Gordon Sturrock (see this diary post for more details) Mrs. Annie Sturrock (Gordon and Douglas Sturrock’s Mother) and Douglas Sturrock. 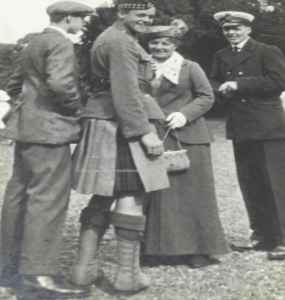