“I had breakfast at 82 C.C.S., and then hung about on the quay at Archangel Pristim waiting for a boat to take me across to Archangel. It was an intensely cold day – some 40 degrees of frost – with a clear blue sky and a biting wind. The ground, of course, was covered deeply with snow, and the Dwina was almost frozen over. My feet soon got like lumps of lead, and when I at length reached 85 General Hospital at Solombola, I could hardly get my boots off. Several of my toes were frost-bitten, and were very painful for days after. Some French Alpine Chausseurs appeared with a young ‘Teddy’ bear which they had caught in the forest. It caused great amusement with its funny antics. The boat, an ice-breaker – arrived about 2.30 p.m. and it was with great difficulty that I got aboard with all my kit. I met Evans, the Sanitary Officer on board, who on reaching the other side, took me up to his mess, and gave me a ‘high’ tea, which saved my life. I reached 85 General Hospital about 6 p.m. just about dead beat. Thus ended the second part of my Russian adventure.” 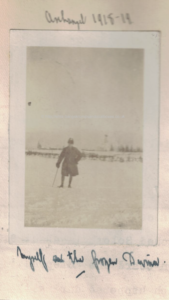 Myself on the frozen Dwina