New ADMS arrives with Troops on the Stephen

“On Sunday, December 1st, I travelled by train to Economie, a small village on the Dwina about 15 miles below Archangel. There I awaited the arrival of the ‘Stephen’ which had some stores aboard for 85 General Hospital. Of course, it was a bitterly cold day, and I was nearly frozen stiff hanging about. A special train arrived during the forenoon full of red, blue, pink and green-tabbed gentlemen, including Sir George Prescott, the Base Commandant, and Major Rooke, the D.A.D.M.S. The latter told me that the new A.D.M.S. – and Col. Blacklaw – was due to arrive on the ‘S.S. Stephen’ and that he was a regular thruster. It seems that the wind is vertical at Medical H.Q! This tickled me immensely! The river here was entirely frozen over. Shortly after noon an ice-breaker appeared round the bend of the river, cutting a way through the ice for the old ‘Stephen’ which soon rounded the bend. It was a great sight to see the ice-breaker cutting her way so easily through the ice which was a foot or two thick in places. These ice-breakers can cut through ice 14 or 16 feet thick. They have very powerful engines, and specially strengthened bows. It was 3 o’clock before the ‘Stephen’ was berthed owing to the difficulty of getting alongside the quay due to the ice. I wasn’t allowed on board to claim the stores, so left in disgust, frozen stiff, and very hungry. I reached Solombola about 9.30 p.m. There were a lot of troops on board the ‘Stephen’.” 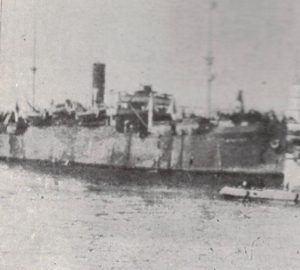 The Stephen at Archangel in May 1919