Sick with Flu but the Bloody Fish Drink all the Water!

“On Monday 16thDecember I was admitted to 53 Stationary Hospital suffering from influenza, and a severe pain in left hip, which was diagnosed as ‘gluteal neuritis’, but which eventually turned out to be rheumatoid arthritis. This had been brought on, no doubt, firstly, from being struck on the hip by a large piece of shell at Langemarcke, Belgium, and secondly, from exposure in the swamps up the line. I was treated very well during my stay in hospital which took me into the New Year. I was put in a 3-bedded ward, and from my bed therein I looked out on to the main hospital approach, and could see all who came and went. Relays of Russian sisters took my temperature most conscientiously two or three times daily. Most of them could talk French, so that one could make them understand one’s wants.

For a while the occupant of one of the other beds in my ward was Lt. Commander Richardson, D.S.O., D.S.C., Albert Medal etc. Before the war he was chief mate on a cargo boat plying between Hull and the Continent. During the war he had spent most of his time in Russian waters on various boats, most of which had been sunk under him. He had been torpedoed three times in the Black Sea, and had many thrilling tales to tell. He talked Russian fluently, and was a tough customer. His flow of non-Parliamentary language was the richest I’ve ever heard. It beat any sergeant-major’s hollow!

Richardson was in Archangel when the Revolution broke out, and had great difficulty in getting away. He had to go about disguised for many days as a Russian peasant. The town at that time was full of anarchists, murderers, and convicts who had been released from all the great state convict settlements around Archangel, including the large fortress of Peter and Paul. He was again in Archangel when the Bolsheviks commenced upsetting things. Archangel, at that time, was a busy port, for many British ships were bringing ammunition, guns, and equipment for the Russian Army. Rasputin’s agents set fire to one British ammunition ship – The Earl of Forfar – which was lying alongside the quay at Bakharitza. Richardson’s ship was lying in mid-stream close by. Some of the Earl of Forfar’s crew failed to get away in time, and Richardson rowed over to the blazing ship, whose holds were full of shells etc, climbed aboard, rescued the men, and rowed away to safety. He had only covered half the distance between the ‘Earl of Forfar’ and his own ship, when the former blew up, wrecking half of Bakharitza, breaking nearly all of the windows in Archangel, across the water, and causing an enormous death-roll. Richardson escaped with a wetting, and was awarded the Albert Medal.

I had always wanted to meet the man, as I had heard so many tales about his great bravery, and rebellious disregard of all danger. Many a time he has saved the situation ‘up the line’ here with his little tug-boat got up as a ‘b—– battleship’ as he put it! He didn’t care a rap for Generals, Admirals or any other high officials. One story especially do I like concerning Richardson. Here it is. A certain young pup of a red-tabbed officer on General Ironside’s staff was busying himself about sending some stores in barges up to one of the advanced positions on the river. This was in summer when the river was very low. Richardson had at that time something to do with river transport, and when the young officer told Richardson that he wanted several barges laden with ammunition sent up the river, Richardson replied that it couldn’t be done as there was no water in the river. ‘But’, said the youngster, ‘where has all the water gone?’ ‘Oh’ said Richardson, ‘I suppose the b———-y fish have drunk it up!’”

Edward Henry Richardson RNR held the rank of Temporary Lieutenant when during 1916 he had been involved in the unfortunate incident in Bakaritza opposite Archangel.

On the 8thNovember 1916 at 1pm an explosion occurred on the Russian steamer “Baron Driesen” which was docked at Bakaritza. The blast was so immense that adjacent vessels as well as wharves were damaged. The resultant blaze rained embers and debris onto the decks of vessels moored at the dock, eventually spreading the flames to the British steamer SS. Earl of Forfar. She was under the command of Captain James Campbell Hurry and was loaded with ammunition and high explosive shells. Captain Hurry in an effort to rescue men from his ship bravely boarded her with some volunteers and had to lift live shells out of the way to get to the crew. Seven injured men were successfully removed from the ship, some physically carried by Hurry. Alongside the Earl of Forfar was moored a 100 ton floating crane from which cries for help were heard and using only a single plank Hurry boarded the crane and brought out another injured man. Lt. Richardson was master of the tug “Sunderland” and along with members of his crew volunteered to board the Earl to rescue the stricken crew members. 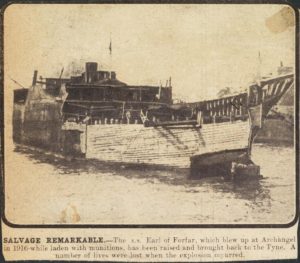 Ten minutes after the last man was removed an explosion took place towards the stern of the Earl of Forfar with such force that windows were smashed in Archangel on the opposite side of the Dwina.

Douglas attributed the fire to “Rasputin’s agents”. 1916 was pre-revolution and Rasputin was thought to have been urging Tsar Nicolai to make peace with Germany and withdraw from the war, allowing the withdrawal of German troops from the Eastern Front. This was exactly the reason that Douglas was part of the force now in Russia trying to force the re-opening of the Eastern Front, after the Treaty of Brest-Litovsk between Lenin and Germany in March 1918, but now following the Armistice it was now no longer an issue. 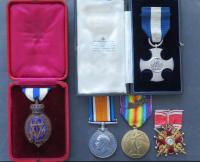 The group of medals won by Lt. Commander Richardson. http://www.british-medals.co.uk/british-medals/awards-gallantry-and-distinguished-service/albert-medal-group-sea-and-dsc-group-both-

The S.S Earl of Forfar was built in 1910 by Russell and Co. on the Clyde, for the Earl of Forfar Steamship Company. She had a Gross Rated Tonnage of 4,453 tons and was powered by steam. Russell and Co were the most prolific builder of merchant ships throughout the period of the Great War.

Although mostly destroyed by the fire and explosions she was eventually salvaged and brought back to the River Tyne for repair.

One Response to 16th December 1918 Monday