“Whilst I was in hospital Col. Blackham, our new D.D.M.S., decided to go home, as he had had enough of North Russia. Soon after he arrived in this God-forsaken country, he developed a slight chill, and admitted himself to the hospital ship ‘Kalyan’, and didn’t budge from these comfortable quarters till he left for England. The ‘Kalyan’ was supposed only to be for serious cases, but, I suppose, D.D.M.S.s with chills came under that category! Col. McDermott, I heard, was to remain on as D.D.M.S. until another came out from England!” 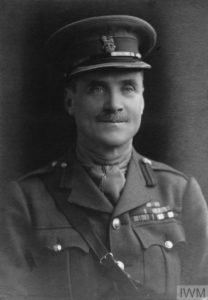 Douglas’s condescending view of Col. Blackham may have been fairly typical of perceptions of established long serving officers held by many lower ranked and volunteered or conscripted servicemen. He had already expressed his dismay at some of the actions or non-actions of the man Blackham was sent to replace (Col. McDermott) so the news that his replacement had possibly used his position to excuse himself through illness and escape an uncomfortable existence here in Archangel didn’t sit kindly with Captain Page.

Born in 1868, Irishman Blackham was clearly an accomplished man in his own right. He had studied medicine in Dublin and qualified as a doctor in 1892. Not satisfied with that he went on to study law and was admitted to London’s Inner Temple in 1903. He went on to be a barrister and accomplished all this whilst being a serving officer in the Royal Army Medical Corp.

He was awarded a Distinguished Service Order in 1912 after attending to Charles Hardinge, the Viceroy of India who was injured following an assassination attempt in 1912.  He had been stationed in India, France, Belgium, Italy as well as Ireland. He was also at the Somme, Messines and Passchendaele and received many awards from the countries he served in.

During World War 2 he came out of retirement and served until the end of the war being promoted to Major-General. He died in 1951 at his home in East Sussex aged 83.