A Honky-Tonk at the Free and Easy

“On April 28thwe had a ‘Free and Easy’ entertainment for the staff and convalescent patients in our recreation room. Each man got two bottles of beer or stout, four packets of cigarettes, or a tin of tobacco, chocolate, toffee, cakes, biscuits, and coffee for the teetotallers. A very good musical programme was gone through, although the piano, borrowed from one of the monitors, was not very good. It was a huge success, and uplifted the men’s spirits wonderfully.”

The men were treated to a party known as a “free and easy” to lift the spirits. Part of the celebrations involved an old piano borrowed from one of the monitors stationed off Archangel. Monitors were small ships of around 540 tons whose sole purpose was to carry a large gun serving as an offshore artillery battery. Of the five that were sent out to Russia two were deployed to Archangel at this time and they were of the M15 class HMS M25 and HMS M27, so it was one of these that provided the piano for the “free and easy”. These ships had a complement of 69 men plus officers and being quite small in size would have seemed quite well populated.

M25 and M27 survived the expedition to Russia until the end of operations in September 1919 when they were both scuttled in the Dwina river after being grounded by the receding water level. They had a few skirmishes with the enemy including becoming almost grounded in the shallow summer waters of the Dwina. They were joined in the summer by M33 a slightly bigger class that had seen action at Gallipoli. M33 survived not only WW1 and Russia, but has survived to this day, despite being hit twice by enemy gunfire, the shells piercing the hull and an internal bulkhead before rattling around the interior without exploding. For those that are interested she is preserved now in dry dock at the Museum of The Royal Navy in Portsmouth. 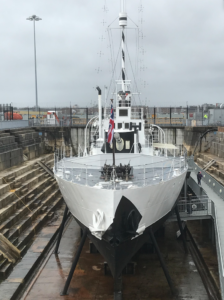 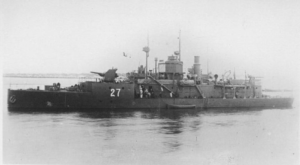