“On Tuesday, April 29th, the ice on the river began to break up. It was a wonderful sight to see the ugly, brown, swirling waters rushing down towards the White Sea carrying huge blocks of ice and masses of debris – trees, houses, and even barges. The crunching noise made by the ice was terrific. Crowds lined the river bank watching the awful spectacle. Some Russian men salved the logs as they were borne downstream on blocks of ice. These men armed with ice hooks jumped from block to block, and tied ropes to their captures. It was an exciting game to watch. By evening most of the ice had disappeared downstream, but the river was still bringing down a lot of ice. The speed with which the river broke up, and the ice disappeared seaward, was due to the fact that ice-breakers had kept the main channel open all winter, and thus prevented blocking at the bad bends and narrower parts of the river. During the afternoon the hospital ship ‘Khalyan’ passed downstream escorted by a large ice-breaker.”

The dynamiting of the Dwina, reinforced by the operations of the ice-breakers that had taken place during the month of April had helped to keep parts of the river open to some traffic. The railway that had been laid on the ice had been dismantled and it had been hoped to allow relief troops to reach Archangel. An ice-breaker was being used as a ferry to cross the river and some movement of ships that had been unable to reach the port began.

Ironside at this time reaffirms the modus operandi for the British forces out in Russia was simply an orderly withdrawal. A simple enough intention you might think but it would prove anything but. 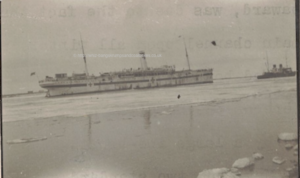 HMHS Kalyan on the River Dwina preceded by an Ice-breaker.
(Picture from the diary all rights reserved)