Disappointment and Fending For Themselves

“On September 1st sixty-nine of our men left for ‘Blighty’ on the Kildonan Castle’. I had hopes of going with them, but had no luck as usual. I wonder when I shall get away. We are left with only ten men, and they are all sergeants, staff-sergeants, or sergeant-majors! No batmen, cooks, or mess waiters. We had to do all our own cleaning up, and the sergeant-cook cooked for all.”

The Glasgow built Kildonan Castle dated from 1899 so was twenty years old as she steamed away from Archangel without Douglas. At 9692 tons she was far bigger than the City of Cairo that had brought him out here to Russia. For most of her life she had plied the route from Southhampton to Natal (now Durban), Algoa Bay (Port Elizabeth), Cape Town, Madeira and East London for the Castle and later Union and Castle Line and during 1914 brought arms and munitions to South Africa. As a passenger ship she would carry a total of 586 fare paying travellers but had previously accommodated as many as 3000 troops to fight in the Boer War.

In 1915 she was converted to a Hospital Ship but later in that year received armaments so she could operate as an armed merchant cruiser. By 1916 she had been commissioned by the Royal Navy and in 1918 was used for repatriation of troops at the cessation of hostilities. By 1919 Kildonan Castle was used frequently between the UK and North Russia and became the last ship to remove Allied personnel from the conflict. Douglas must have wondered why there was no room for him on this occasion. 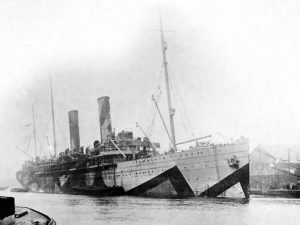