The Wait is Over

“September 4th was a great day for me. I left for Blighty on the ‘Cap Verde’, a captured Hun liner. The excitement was intense. I didn’t sleep all night and was up about 5 o’clock getting all my kit packed up. A motor lorry took my kit along to the quay at Archangel, and I journeyed thither by electric car – my last tram ride in Bolshevik Russia. All was bustle on the quay-side. I got on board at 10 o’clock, and found that all British officers had to sleep in hammocks in one of the holds. There were a lot of Russian civilian refugees on board, who occupied all the cabin accommodation. The very excellent meals were served in a gorgeous saloon. I fairly revelled in the change of food, and especially enjoyed my breakfasts on board. We sailed at five o’clock p.m. and I heard a great sigh of relief as we pulled out into mid-stream. Of course, I knew most of the officers aboard. We were a very happy party.” 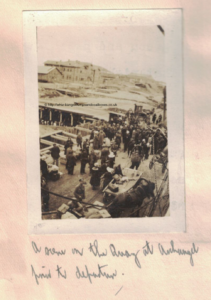 A scene on the Quay at Archangel prior to departure.

Almost ten months had passed since the Imperial German Navy fleet (Kaiserliche Marine) had been forced to surrender their ships into British custody, in a humiliating surrender on the 21st November 1918. It became the final action of WW1 ten days after the armistice. Many of the fleet of 74 ships were interred in the deep anchorage off the Orkneys, Scapa Flow. Then on June 21st 1919  following the orders of Admiral Ludvig von Reuter who was left in charge of the 5000 strong German Navy still aboard their ships, 52 great German fighting ships were scuttled by their crews and sent to the bottom. Nine unarmed German sailors were shot during the panic and became the last men killed of WW1. Much of the remaining merchant fleet was spilt between the allies and now Douglas was sailing home on one of Germany’s most luxurious passenger liners the SS Cap Verde.

The Cap Verde operated from her home port of Hamburg and travelled the whole globe. She operated a regular service to the South of Brazil via Dover and had been a visitor to South Africa, Australia and Vancouver. For now, she would make regular trips removing the British troops and thousands of Russian refugees from Archangel.