“On the evening of Thursday, 4th October, Dr. Kelman of Edinburgh, lectured to us on ‘America and the War’. He was splendid. I had a chat with him at the close of the meeting, and when he saw my M.C. ribbon, he said: ‘Ah! Another ribbon for the Operetta House!’ – (referring to his Sunday evening student meetings in the old Operetta House, Edinburgh, which I attended regularly.)”

The Old Operetta House stood in Chambers Street, Edinburgh from 1871 to its final demise around 1951. Chambers Street was named after the famous Scots architect William Chambers who was actually born in Gothenburg, Sweden. Among his best known works are Somerset House in London and the Pagoda at Kew Gardens. He now proudly surveys the street from a pedestaled memorial in the middle of the street. 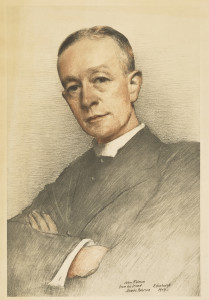 Dr. John Kelman was an established author and a prominent figure in the Presbyterian church, known for his lectures in both Britain and the United States. Described as one of the best known Ministers in Great Britain.