A French German gives up the fight.

“On the 15th December a sergeant of ‘C’ company brought down to H.Q. a German who had crossed on to our lines, and given himself up. He was a strapping, young chap, aged 22, and an Alsation. He said he was ‘fed-up’ with the war, especially as he had to fight against his own people. We were relieved by the 16th R.W.F. that night, and went into support trenches. I remained with Battalion H.Q. in the support line.”

The disputed area of Alsace, west of the Rhine had fallen into German hands as a result of the Franco Prussian war of 1870. The area was contested for over 300 years before that time and in 1871 as part of the peace treaty Alsace and Northern Lorraine was annexed by von Bismark and became part of the newly united state of Germany under rule of the Kaiser. Many Alsatians had joined the German Navy during WW1 in order to avoid fighting among families, but were involved in the naval mutinies in November 1918 following the defeat of the Kaiser and Germany. 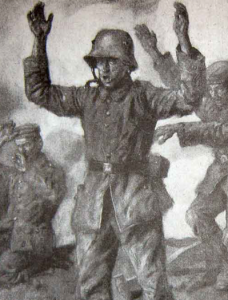