“Next day – Sunday September 8th – we were up early, and moved off shortly after 8 a.m. It was a rag-time cavalcade – Royal Scots, French and Russians with over fifty carts, and the two guns bringing up the rear. Some of the horses pulling the guns were mounted by women! The road was hilly, and at some parts we had difficulty with the guns. There was dense forest on each side of the road all the way, Capt. Scott passed us in a swift drosky, and with four mounted White Guards riding behind – the General’s escort!

We eventually reached Teogra about midday. Teogra consisted of a group of three small villages of the usual type, and about a verst apart. The centre village contained the church. With the French we occupied the most southerly village – that nearest the enemy! – whilst the Russians and artillery remained in the centre one. The Bolsheviks had dug a series of shallow trenches just outside the centre village. They had evidently decided to make a stand, but got the ‘wind up’ when they heard of the Allied victory at Obozerskaya.

Capt. Du Pay went off on his own in the afternoon to Seleskoe, and sent back a message in the evening to the effect that he had reached that place, and could find no signs of the Bolsheviks at all.  One of our planes flew over too, and reported one enemy cart entering Seleskoe. This was Capt. Du Pay! What if the aviator had dropped a bomb on him!

All the houses in Teogra had been looted by the enemy before they left, and all food stolen from the poor peasants. We billeted ourselves in an empty house, which was in a filthy condition, and full of bugs – great, big red fellows. And they didn’t forget us at night either!

I took a walk along the river bank in the afternoon. Quite a considerable area of country around Teogra was under cultivation, and in the warm sunshine everything looked very nice.” 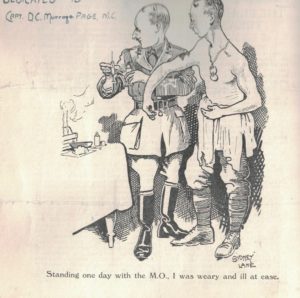