A Trail of Rape, Pillage and Murder

“Monday September 9th, was another, bright sunny day. We were up early again, and moved off about 9 o’clock for Seletskoe. Lt Anderson with his platoon went on ahead. I went along with the main column. At the Obozerskaya road-junction we left a small out-post of Russians. The Bolsheviks had attempted to destroy the large, substantial, wooden bridge across the River Teogra, but hadn’t made much impression on it.

We entered Seletskoe (pronounced Seltsoe) about noon. Everywhere we saw signs of the recent Bolshevik occupation – windows smashed, and the interiors of houses wrecked. The villagers were overjoyed to see us, and gave us a hearty welcome. The Mayor told us that a French officer, belonging to Col. Haselden’s force, whom the Bolsheviks had taken prisoner, had been horribly mutilated by them. They cut off his ears, and nose, gouged out his eyes, and cut out his tongue, leaving him to die by the road-side. He was buried by the village priest, and for doing this the unfortunate priest was shot by the murderous villains. Nearly all the women in the village had been violated by these brutes, who also carried off with them the wife, and two young daughters of the village post-master. All food and money, and many cows, sheep and hens had been stolen, and the church broken into and robbed of its valuables.

We heard that Col. Haselden with his little force had arrived safely at Kholmogorskaya on the railway, after a most trying time in the forest.

Inside the little chapel in the churchyard we found two dead Bolsheviks. They had been wounded, and were absolutely naked. We buried them rather unceremoniously in the church-yard.

Some of the villagers told us that they had seen the Bolsheviks bring five British prisoners into the village a few days ago, and that the Bolsheviks had taken them into the forest one day, and had come back without them, but carrying their clothes. We could find no trace of them anywhere.

Capt. Shevtoff’s men were on outpost duty outside the village, and brought in two Bolshevik prisoners in the afternoon. They were pitiful objects – pale, thin and unshaven. They were only boys, and looked half-starved. Their clothes were ragged and torn. They wore no socks, and their boots were full of holes. They told us that they had got lost in the forest, and had been wandering about for days without food, and that the Bolsheviks opposite us numbered twelve hundred. They broke down completely after Capt. Shevtoff’s examination and wept like children. They said that they didn’t know why they were fighting against us, and blessed us for saving them.

The Bolsheviks left stacks of propaganda papers in all the houses printed in English and French, urging our troops not to fight against them, but to return to their homes and leave Russia to manage for herself. Russia for the Russians!

Seletskoe was a long, straggling village of three thousand inhabitants, with a large expanse of fertile land all around, and the River Entsa forming the eastern boundary. We occupied the second flat of a large house, and were very comfortable. I discovered the local doctor’s house which contained an excellent surgery and dispensary. But the Bolsheviks had destroyed many of the drugs and instruments. I was told that the local doctor had gone to Archangel about a month ago with four thousand roubles belonging to the village, with which to purchase drugs etc., but had not been heard of since! However, I saw his assistant – unqualified – and got his permission to use the drugs in the dispensary.

In the evening our cavalry arrived – some twelve or fourteen Russians but no horses! The Russian officer in charge was a queer-looking fellow, with red breeches, a Norfolk jacket, big top-boots, and huge spurs!

Whilst we were at supper a weeping woman came in to tell us that the Bolsheviks had stolen everything from her, including a cow. She wanted us to give her another cow there and then! Poor old Capt. Scott had a lot of this sort of thing to deal with, and it took us a long time to impress upon the ignorant people that we were not a travelling ‘Harrods Stores’!” 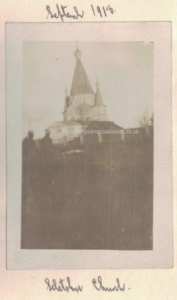